I think I am the first to install the new Catalyst 7.2 for the (still) unsupported ATI Mobility X1900. This is not possible in installing them in the normal way. Here is the link to explain how I did :

I hope that it will help all those who don't want the old Fujitsu drivers and want to benefit of the latest Catalyst Control Center !
Top

Here is a screenshot of the Catalyst 7.2 well installed 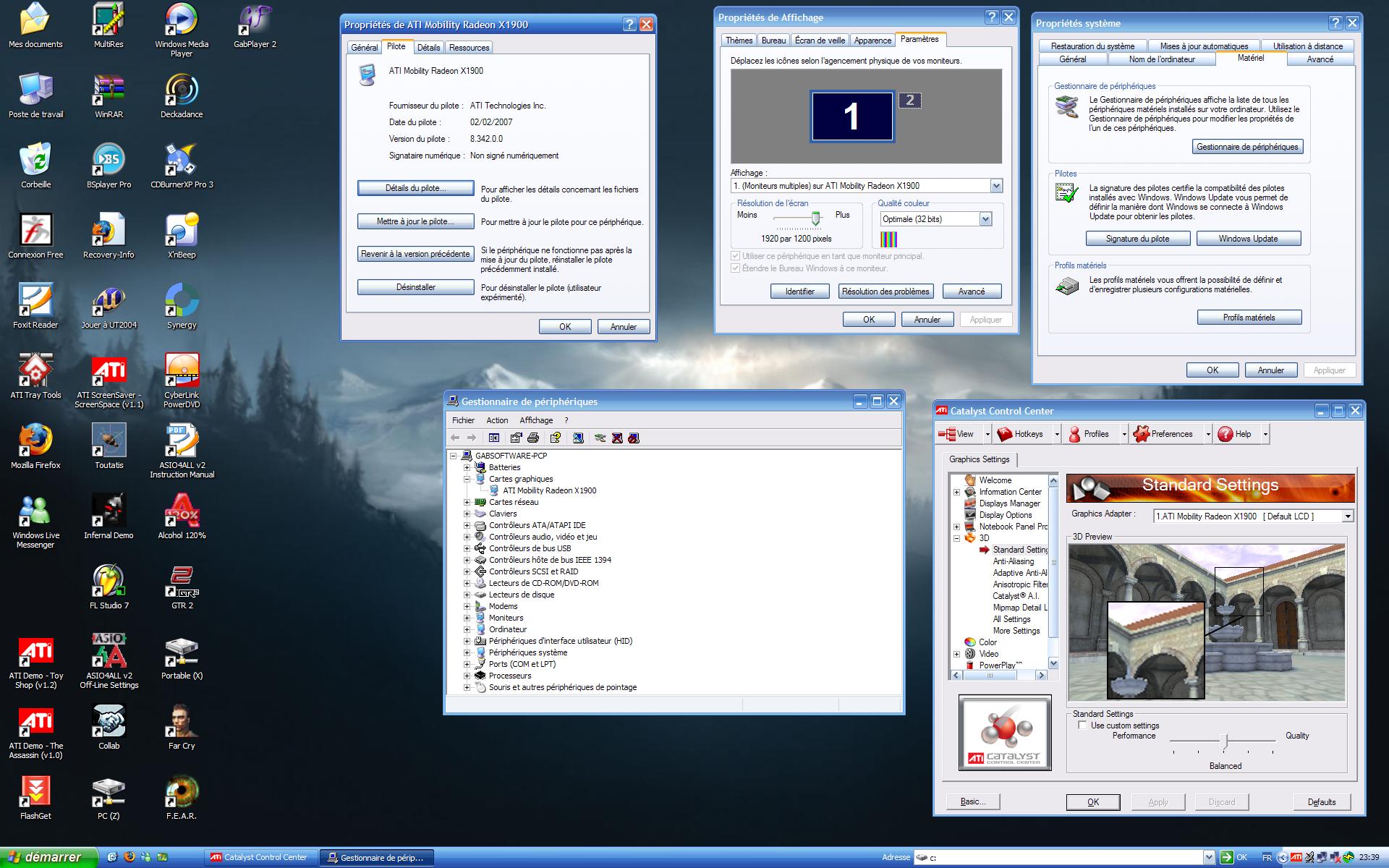 Hello,
finaly someone , I´m going to try it .
Let you know later.
Thx

Hi,
itś not workin what system are you runing. I have WinXP MCE.
Could it be the problem?
Regards.
Thx for reply

I've had some real issues with my 1554 with constant "Display driver R300 stopped responding and has successfully recovered" errors. So I followed the advice on that page as closely as I could but was not sure what to add to the inf file as the page is for xp. Any idea what I would need to add for Vista?

I'm surprised no one else has commented on this. My laptop freezes constantly and I presumed it was because of this driver issue. Hopefully its not a hardware fault

I did try to install xp but it was a real mare because of the sata drives, when I finally managed to get xp to recognise the driver by loading the sata drivers during startup xp was unable to actually access them. Any help in this regards would also be appreciated!
Top

The described method in the first post is right in theory, but wrong in pratice for Vista at least.
The only way I've found is to install the full Fujitsu package, and in top of that , to proceed as decribed, except that the only string to add is
"ATI Mobility Radeon X1900" = ati2mtag_M58, PCIVEN_1002&DEV_7284

Take care not to have trailing whitespace caracters on the "ATI Mobility X1900" part of the string, the installation will fail.

Install as described , going through the device manager.

If that succeds, you'll have Control panel 6.8 + driver 7.2 , which seem to get along for now, without bug.
Top

Hello.
I have a 9700 Radeon, WinXP home on AMILO A 1630 Will this procedure you described work for it? I have installed the driver, but at system startup and whenever I try to run any applications which come with the driver it keeps on telling me something like: "Could not load file or assembly 'CLI.Implementation, Version=2.02589.34531, Culture=neutral, PublicKey Token=90ba9c70f846762e' or one of it dependencies. The system cannot find the file specified". BTW the driver itself appears to be working fine.
Does it matter, that the driver did require a .NET framework installation at the start, which I did.
What could be the problem causing these messages?
Appreciate any helpm with this.

P.S. Why doesn't Fujitsu provide up to date drivers and why does ATI refuse to service us the Fujitsu notebook owners?
Top

you say use the fujitsu full driver install - do you mean those supplied with the laptop and in the fj downloads (same I think)? The inf file seems to already have this line (with a few more characters) and installs the 'right' driver.

Or do you mean to add this line to the normal radeon install from ati?

Either way I suspect my crashes and r300 errors are a hardware problem, fj tech support agree and a replacement is being shipped next week

actually managed to install the 8.342 drivers now with your help vs, will see how they go, cheers

The latest package downloadable on Fujitsu's installs properly, as expected.
However, the problem is it is an "old" driver, dating back fom November 2006. The other major problem is there is NO OpenGL driver in this package (bybye Quake4, Prey, Doom3... and Eduke32 )

So the solution is to install a more recent driver, namely the Catalyst 7.2.
Problem is, such driver packaged by ATI still canno't recognize the Mobility X1900. So this driver package refuse to install.

The method consist in making the X1900 recognized by the driver package, and that's
http://www.driverheaven.net/driverheave ... x1900.html
decribed.
However, as I stated (?) above, the additional strings provided are wrong for Vista. The one that worked for me is this one.

And there is another limitation: The driver package is indeed composed of 2 parts : the driver itself, and the ATI control panel (aka Catalyst Control Center), to manage graphical settings.
Somehow, on Vista you can install the new driver, but the Control Panel itself refused to install.